The History of Infant Swimming Resource 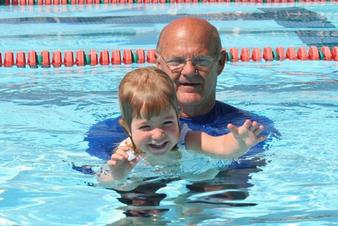 ISR Founder Dr. Harvey Barnett
In 1966, the founder of Infant Swimming Resource, Dr. Harvey Barnett, returned home from his job as a lifeguard to see an ambulance crew putting his infant neighbor in a body bag. He had drowned in a few inches of muck and water at the bottom of a canal.

In response to this tragedy, he offered to teach all of the 5-year old's in the neighborhood to swim. As each child learned to swim, he learned more about how to teach young children. The idea was to work with older children until his skills were well-defined and effective and then move down in age to the next younger group. Barnett learned to teach, listen, observe and be critical.

By the end of the first season, he was working with 3-year old's. He took miles of Super 8 movie film, reviewed these films and made extensive notes. He began communicating with hand signals and verbal directions - a key element of ISR Self-Rescue® today.

After being observed by several faculty members from the Department of Psychology at the University of Florida, Barnett began to realize what it would take to get into the realm of aquatic survival for non-verbal infants. He changed his major to Psychology and earned a BA with honors. A local newspaper ran an article about his program and 356 students went onto his waiting list. He had never taught another person to teach his method until tragedy struck. Two babies on the waiting list drowned before he could teach them and the need to teach instructors was born.

At this time, Barnett began training instructors and entered the Graduate School at the University of Florida to where he earned a Masters of Science Degree from the Psychology Department and a Ph.D. from the College of Education. Upon earning his Ph.D., he began teaching courses in special education, instructional theory, computers and statistics, and child psychology at Cleveland State University. Eventually Barnett left the university environment and gave Infant Swimming Resource his full-time attention.

The program has now taught more than 260,000 infants and young children how to survival swim and it has more than 7 million safe and effective lessons to its credit.  ISR Self-Rescue® has over 450 certified instructors across our nation!